WASHINGTON - Each April, the U.S. Department of Housing and Urban Development (HUD) observes Fair Housing Month. The theme for the 2020 commemoration is Call HUD: Because Sexual Harassment in Housing is Illegal. The theme serves a dual purpose; first, as a public awareness campaign that urges the persons who experience sexual harassment where they live to ‘call HUD’ for help and second, the theme reflects the Department’s continuing efforts to combat this and other forms of discrimination.

This year’s theme focuses on protecting individuals from harassment by property owners, managers, maintenance workers or other residents, and helps to educate the public about what behaviors and actions constitute sexual harassment and resources HUD offers to those that experience harassment. 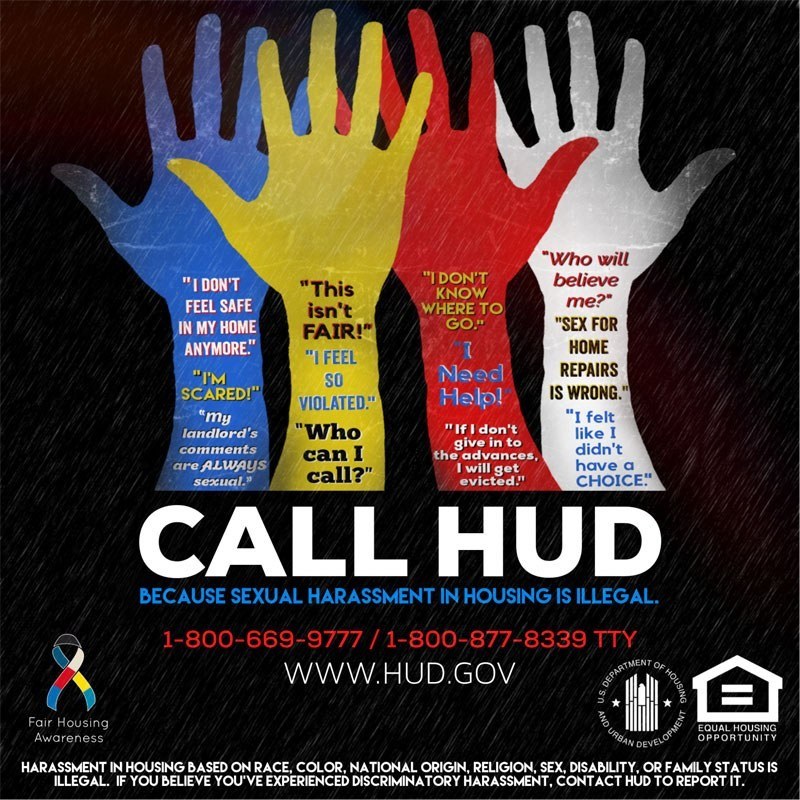 “While any form of discrimination stains the very fabric of our nation, HUD is especially focused on protecting the right of individuals to feel safe and secure in their homes, free from sexual harassment or unwanted sexual advances,” said HUD Secretary Ben Carson. “This theme, which is a call to action, is an appeal to those who experience discrimination, particularly survivors of sexual harassment, to contact HUD for help. Much work remains to be done, but HUD’s efforts in this area are already producing real results for real people.”

“Complaints we receive demonstrate the importance of continuing our commitment to shining a light on this form of discrimination and letting everyone know that HUD is here to help,” said Anna María Farías, HUD’s Assistant Secretary for Fair Housing and Equal Opportunity. “Even as the nation is dealing with a health crisis unlike any we have experienced in recent history, HUD is open for business and working to ensure that no one has to tolerate harassment or unwanted sexual advances in the place they call home.”

Recently, HUD approved several Conciliation Agreements with housing providers in Napa Valley, California, resolving allegations that the on-site manager for one of their properties sexually harassed female residents. The settlements called for the owners to pay $49,000 to women who filed complaints, remove the on-site manager and attend fair housing training.

In addition, HUD and the Department of Justice continue to work together through a nationwide joint initiative that is combating sexual harassment in housing.

This year, throughout the month of April, the “Humans of HUD” photoblog will feature stories from victims of sexual harassment in housing, highlighting the personal testimonies of survivors and those who helped them. FHEO will also be promoting its popular “Real People. Real Results.” (RPRR) series, which highlights the fair housing efforts of extraordinary people around the country. Every week in April, HUD will feature a fair housing hero who combats sexual harassment and other forms of harassment in housing. For information about the series, go to: www.hud.gov/fairhousing/sexualharassment.

Every year, HUD and its fair housing partner organizations pursue enforcement actions, work to enhance the public’s awareness of their housing rights and emphasize the importance of ending housing discrimination. Last year, the Department charged Facebook with violating the Fair Housing Act by encouraging, enabling, and causing housing discrimination through the company’s advertising platform. Overall in 2019, HUD and its partner agencies settled more than 600 complaints alleging discrimination based on one or more of the Fair Housing Act’s seven protected classes.

Everyone thrives in a Vibrant Community

What is Fair Housing?

Fair Housing means all people have equal access to the housing of their choice that they can afford. Fair Housing Laws ensure this equal access. Fair housing laws apply to the sale or rental of nearly all forms of residences, including apartments, houses, mobile homes, nursing homes, homeless shelters, and even vacant lots to be developed for housing. The Federal Fair Housing Act prohibits the denial of housing to a person based on the person’s race, color, religion, national origin, sex, familial status or disability.